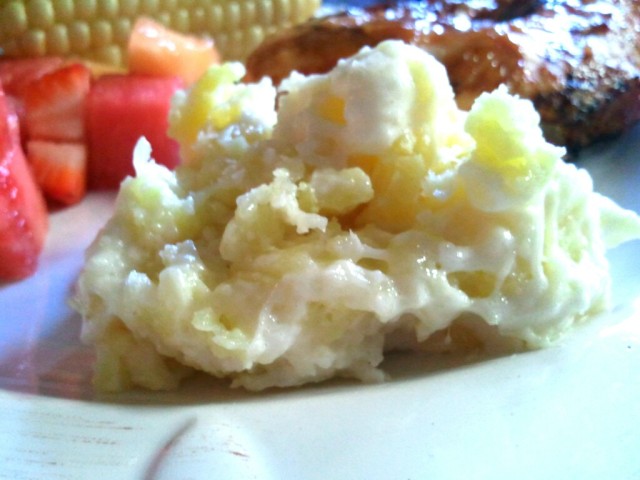 What are Chantilly Potatoes? I knew that Chantilly was a town just outside of Paris, France. Is it such a great town that it had the way you prepare some potatoes named after it? YES! And did you know that Chantilly is famous for its cream? It is actually believed to have been the precursor for modern day whipped cream. And wouldn’t you know, the secret ingredient in this recipe is whipped cream! It’s all making sense now.

So in honor of Julia Child’s 100th birthday, here is a French inspired, easy, tasty potato side dish.

Place potatoes in a microwave safe bowl and cover with plastic wrap. Microwave for about 10 minutes, or until soft and tender. (I gave mine a shake halfway through) Using a potato masher, mash the potatoes well. Add salt and pepper then cover again and microwave for an additional 3 minutes.

Bake in a preheated 400 degree oven for 20 minutes, until top is golden brown. Let rest about 5 minutes before serving.