I decided to do a little something different today. If you have been on Pinterest in the last month or so, the chances that you have seen this Crockpot Orange Chicken recipe floating around are pretty good. I myself am a lover of the Orange Chicken. It is just about the only thing I like at Panda Express. So when I saw this recipe, I knew I must give it a try. It sounded perfect. A crockpot recipe without a condensed soup, a dish that I knew I loved, and a recipe that is simple! The original recipe is here. I began by simply reading the recipe and my first thought was that there were no spices in this recipe. There was a whole lot of “orange” and nothing else. So began my quest to see exactly what Panda Express used in their Orange Chicken recipe. Would it surprise you to know that there is no Orange in Panda’s recipe? From what I could gather, they actually named it Orange Chicken because of the color it was after it was done cooking. They use a little orange zest to top off the chicken, but that’s it! Then I started to read the reviews of the Crockpot Orange Chicken post. Many people said that it was chicken in orange soup. Yuck! I started to wonder if the picture she used was really from the recipe she posted. How could it be? So using the information I gathered I started formulating my own recipe. This is NOT Panda Express Orange Chicken. But the flavor is phenomenal and my kids both said “YUMMY!” as soon as they had a bite. It was a scrumptious meal, and one I will make again. But after 45 minutes of trying to “thicken” the sauce with Corn Starch, I just decided the flavor was enough and it was alright that it wasn’t as thick as Panda Express. If I had to name this meal myself, it would be something like “Ginger Orange Chicken”. Yum! 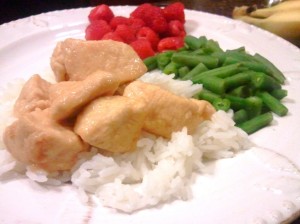 In a medium bowl combine orange juice, soy sauce, rice wine vinegar, ketchup, dark brown sugar, ginger, garlic powder and salt. Stir until combined and set aside. Put flour in a shallow bowl. Then dredge chicken and shake off any excess flour. (for any beginners out there, dredge just means start rolling that chicken around in the flour until it is completely covered!) In a large skillet put about 2 -3 Tablespoons of Olive Oil and start frying the flour covered chicken chunks. (medium high heat) Brown on each side. Keep in mind that the chicken does not need to be cooked through, as it will be going in the crockpot. Once chicken is browned, place in crockpot and dump the sauce over the chicken. Should look something like this: 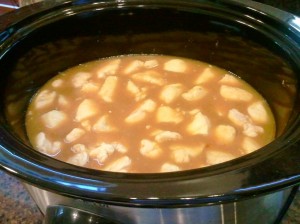 Cook on highfor 1-1.5 hours. Again, sauce will not be thick, but the flavor is super great! And the chicken is moist and tender. Serve hot over rice!

One thought on “My Review on Crockpot Orange Chicken” 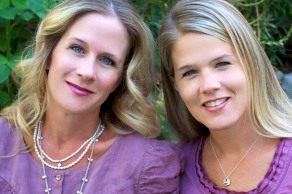